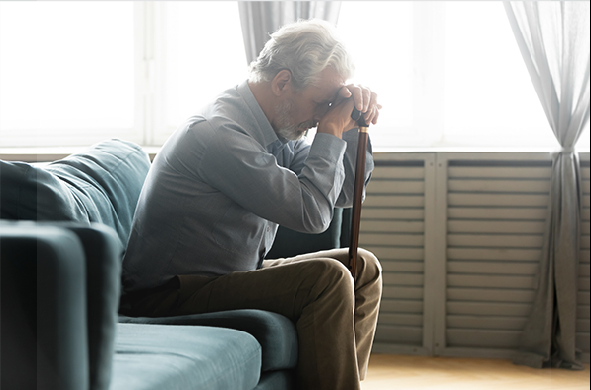 There are more than 1.4 million senior citizens living in nursing homes. Elderly residents are a particularly vulnerable population, with mental or physical incapacitation leaving them more susceptible to abuse and neglect.

It can be easy to recognize nursing home abuse when cuts, bumps or bruises are present. But issues like overprescription and emotional abuse are harder to identify.

Learn more about the different types of elder abuse to help protect our nation's senior residents.

Physical abuse is defined as the use of physical force that may result in bodily injury, physical pain, or impairment.

Physical abuse may include but is not limited to such acts of violence as striking (with or without an object), hitting, beating, pushing, shoving, shaking, slapping, kicking, pinching, and burning. In addition, inappropriate use of drugs and physical restraints, force-feeding, and physical punishment of any kind also are examples of physical abuse.

Sexual abuse is defined as non-consensual sexual contact of any kind with an elderly person. Sexual contact with any person incapable of giving consent is also considered sexual abuse. It includes, but is not limited to, unwanted touching, all types of sexual assault or battery, such as rape, sodomy, coerced nudity, and sexually explicit photographing.

Emotional or psychological abuse is defined as the infliction of anguish, pain, or distress through verbal or nonverbal acts. Emotional/psychological abuse includes but is not limited to verbal assaults, insults, threats, intimidation, humiliation, and harassment.

In addition, treating an older person like an infant; isolating an elderly person from his/her family, friends, or regular activities; giving an older person the “silent treatment;” and enforced social isolation are examples of emotional/psychological abuse.

Neglect is defined as the refusal or failure to fulfill any part of a person’s obligations or duties to an elder. Neglect may also include failure of a person who has fiduciary responsibilities to provide care for an elder (e.g., pay for necessary home care services) or the failure on the part of an in-home service provider to provide necessary care.

Neglect typically means the refusal or failure to provide an elderly person with such life necessities as food, water, clothing, shelter, personal hygiene, medicine, comfort, personal safety, and other essentials included in an implied or agreed-upon responsibility to an elder.

Abandonment is defined as the desertion of an elderly person by an individual who has assumed responsibility for providing care for an elder, or by a person with physical custody of an elder.

Self-neglect is characterized as the behavior of an elderly person that threatens his/her own health or safety. Self-neglect generally manifests itself in an older person as a refusal or failure to provide himself/herself with adequate food, water, clothing, shelter, personal hygiene, medication (when indicated), and safety precautions.

The definition of self-neglect excludes a situation in which a mentally competent older person, who understands the consequences of his/her decisions, makes a conscious and voluntary decision to engage in acts that threaten his/her health or safety as a matter of personal choice.

According to the World Health Organization, the global population of people aged 60 years and older will more than double in 2050. It's important to resolve issues with elderly care now before billions of residents are subjected to nursing home abuse and negligence.

Recognizing abuse and neglect will be crucial for safeguarding the wellbeing of more than 2 billion elderly individuals the future. When you're able to identify an issue has occurred, please take steps to report nursing home abuse immediately.