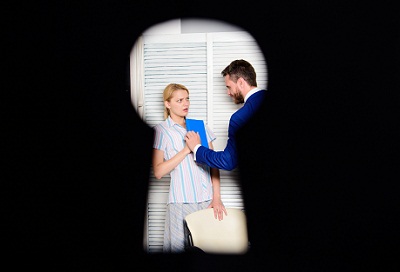 Under federal law and Department of Labor (DOL) policy, harassment by DOL employees of DOL employees based on race, color, religion, sex (including gender identity and pregnancy), national origin, age, disability, genetic information, sexual orientation, or parental status is prohibited. The Department of Labor does not permit harassing conduct by anyone in the workplace, including contractors.

Prohibited workplace harassment may take either of two forms. It may entail "quid pro quo" harassment, which occurs in cases in which employment decisions or treatment are based on submission to or rejection of unwelcome conduct, typically conduct of a sexual nature. Workplace harassment may also consist of offensive conduct based on one or more of the protected groups above that is so severe or pervasive that it creates a hostile or offensive work environment or when it results in an adverse employment decision (such as being fired or demoted).

DOL policies and procedures promote prompt recognition, reporting, and remedying of harassing workplace conduct with the goal of eliminating such conduct quickly and effectively, even in cases in which the reported conduct may not be severe and pervasive so as to constitute a violation of federal law.1

Quid Pro Quo Harassment – "This for That"

Quid pro quo harassment generally results in a tangible employment decision based upon the employee's acceptance or rejection of unwelcome sexual advances or requests for sexual favors, but it can also result from unwelcome conduct that is of a religious nature. This kind of harassment is generally committed by someone who can effectively make or recommend formal employment decisions (such as termination, demotion, or denial of promotion) that will affect the victim.

Examples of behaviors that may contribute to an unlawful hostile environment include:

When harassing conduct violates the law*

First, unlawful harassing conduct must be unwelcome and based on the victim's protected status.

Second, the conduct must be:

Whether an instance or a pattern of harassing conduct is severe or pervasive is determined on a case-by-case basis, with consideration paid to the following factors:

Each factor is considered, but none are required or dispositive. Hostile work environment cases are often difficult to recognize, because the particular facts of each situation determine whether offensive conduct has crossed the line from "ordinary tribulations of the workplace, such as the sporadic use of abusive language . . . and occasional teasing,"2 to unlawful harassment.

*However, the intent of the Department of Labor's Harassing Conduct Policy is to provide a process for addressing incidents of unwelcome conduct long before they become severe and pervasive enough to create a hostile work environment under the law.

Harassing Conduct Policy – The Department has determined that the most effective way to limit harassing conduct is to treat it as misconduct, even if it does not rise to the level of harassment actionable under the law. The goal of this policy is to eliminate harassment before it becomes severe and pervasive enough to violate the law.

Therefore, for the purposes of the Harassing Conduct Policy, harassing conduct is defined more broadly as "any unwelcome verbal or physical conduct based on any characteristic protected by law when: (1) the behavior can reasonably be considered to adversely affect the work environment; or (2) an employment decision affecting the employee is based upon the employee's acceptance or rejection of such conduct." Conduct that "adversely affects the work environment," even though it may not be "severe or pervasive" as required under federal law, is prohibited by the Harassing Conduct Policy.

It is the responsibility of everyDOLemployee to promptly report harassing conduct to anyone in your supervisory chain; or to your Agency EEO Manager in the National Office; or for regional employees, to the Regional Administrator, OASAM.

Management must take prompt, remedial action to investigate and eliminate any harassing conduct. All information will be maintained on a confidential basis to the greatest extent possible.